hide
hide
No announcements have been posted yet for Lakewood Rangers Varsity Ice Hockey. 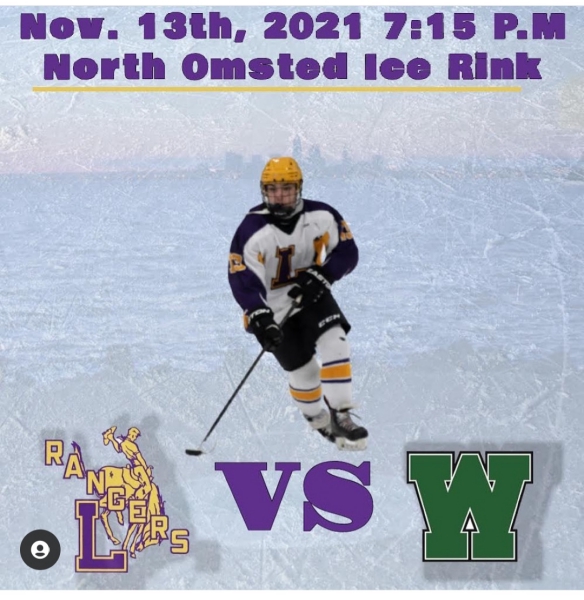 Lets Welcome back all our returning players…And happy to announce our 5 New Freshman players.
Congrats to Senior Austin Sherer as the teams Captain.

AND OUR SENIORS:
Austin Scherer #3 Congrats to our Captain
Dyllon Yatson #20
Zach Vuyancih #1

Tonight we head to North Olmsted Ice Rink to take on Westlake Demons at 7:15pm.
Bus – need to be at Winterhurst at 5pm

Lakewood’s Rangers suffered a tough 4-3 loss to the Canfield Cardinals on Sunday at the Deep Freeze in Boardman. Although Jude Johnson scored just 26 seconds into the game on a nifty pass from Gavin Fielder, the Rangers fell behind 3-1 in the second period. Pulling to within 1 with just 6 minutes to play on a power play goal by Eli Ladue, Lakewood gave up a goal to Canfield in the next ,minute to once again fall behind by two.
Pulling their goalie, Lakewood scored on an Alex Blinky shot with 30 seconds to ply, and had some solid opportunities in the last minute, but couldn’t come up with the game tying goal.
The loss dropped the Rangers to 3-2 on the season.
Next up for the Rangers is the CVCA Holiday tournament which will be held at the Garfield Heights Recreation center. Lakewood will open the tournament on Tuesday at 11am against the Host Royals. They will then follow up with a 2pm tilt against the Orange Lions. Because of the covid restrictions, no spectators will be allowed to view the game in person.
The team will then face of against Normandy on Wednesday morning at 11am and have either a consolation or championship game later on Wednesday.
Following the tournament, Lakewood returns home to host the Westlake Demons in a Saturday night contest at 7pm

The Lakewood Rangers extended their win streak to three games on Tuesday night as they defeated the NDCL Lions 10-0 at the Pond in Chagrin Falls.

Sophomore Gavin Fielder once again led the Rangers with five goals and 2 assists in the win.
Jude Johnson and Gavin Fulmer each chipped in a pair of goals while Alex Blinky added one.

Goalie Zach Vuyancih got the win in goal netting his first ever varsity win and shutout.

The Rangers now get a four day break for the Christmas holiday , returning back to action on Sunday against the Canfield Cardinals at the Ice Zone in Boardman. That game will kick off a six game week for the Rangers, ending in a home game on Saturday January 2nd against the Westlake Demons.

Behind a seven goal second period explosion, the Lakewood Rangers posted a resounding 11- victory over the CVCA Royals Saturday night at Winterhurst. Sophomore Gavin Fielder led the Rangers with four goals and 2 assists in the game while fellow sophomores Jude Johnson and Eli Ladue each added a pair of goals. Sophomore defenseman Gabe Constantine, Senior defenseman Alex Blinky and Junior forward Dylan Yatson each added a single goal to round out the scoring.

The seven goal second period was the most prolific scoring period for the Rangers in the past 6 years.

Lakewood finished out the Normandy Christmas tournament on Sunday night when they face the host Invaders in a 6pm showdown at Ries Arena.